If two recent incidents are any indication, people in American Fork might want to be careful about upsetting their neighbors. 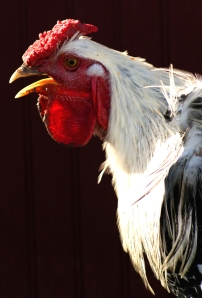 In one case, a man was unhappy because his neighbor’s dog pooped on his lawn. While driving down the road, he spotted the dog on the other side of the road. Taking advantage of the opportunity, he swerved his car into the opposite lane and ran over the offensive pooch. Then for good measure, he put the car in reverses and backed over the animal again. The dog died.

In the second incident, a man killed several of his neighbor’s chickens. No reason for the killings was given, but a witness said he saw the man grab one of the birds by the neck and swing it around until it died. I currently have a rooster that can be pretty noisy at times. It’s highly possible that one or more of my neighbors has wanted to wring its neck. But I hope that instead they would just tell me and allow me to resolve the problem.

I grew up in an area where a neighbor’s horses or cows would sometimes escape and end up in our yard. Not only would they poop on the grass, sometimes they would trample or eat the plants in our garden. We usually just picked up the phone, called the neighbor and asked him to come get his cow. Or sometimes we would catch the escaped horses and walk them back down the road. The thought of killing the transgressing animals never seemed like a viable option.

It was a pain to clean up the cow pies and to repair the damage to the garden, but it was just something we accepted as the cost of maintaining good relations with our neighbors. I’m sure some of the things we did caused an inconvenience for them as well—like the time my brother accidentally burned the neighbor’s bean field.

I hate to think about a world where people believe that minor offenses by a neighbor warrant a death sentence. I no longer have any children living at home, but my neighbors do, and sometimes those kids keep me awake at night with loud music or just by running around the streets after dark. I don’t like it, but I don’t plan to kill them. That seems fair, because they allowed all of my children to survive to adulthood and I’m sure there were times when it was my children that were creating the ruckus.