I’m moving a horse to Wyoming to give to my son who lives there. If you 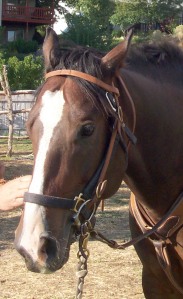 don’t own horses, you probably aren’t aware that you can’t just take a horse from one state to another without proper documentation.

One of the documents needed is a transportation certificate from the Utah Department of Agriculture (UDA) issued by a state brand inspector. Believe it or not, even though this is the 21st century, a great deal of livestock rustling still takes place and the brand inspector plays a vital role in preventing animal thefts.

So the brand inspector came to my house to verify ownership and identity of the horse that I am transporting to Wyoming.

Not many people actually brand horses with hot irons anymore. Instead horses might be tattooed, microchipped, freeze branded, or registered. In many cases there is nothing to prove ownership or identity of the animal—the case with the horse in question.

So the brand inspector establishes the identity of the horse for legal purposes by sketching and describing any identifying markings of the horse. The inspector has a small booklet with an outline drawing of a horse. Using a pen, he draws in the horse’s individual markings and then adds a description of the colors. He must press hard, because several carbon copies are included. This is the permanent identification of the horse for transportation purposes.

As I watched this procedure, I could not help but wonder: HAS THE UDA HEARD ABOUT DIGITAL CAMERAS?

In our technological age, an actual photograph of the horse would seem to provide a more accurate identification than a hand-sketched drawing on a carbon paper. I’m sure it would be more efficient to equip each brand inspector with a digital camera, a laptop and a portable printer.

This is a perfect example of a government bureaucracy doing something a specific way because that is how it has always been done.

The situation reminded me of an experience I had several years ago while working in Russia. I accompanied a friend to a utility office where he had to pay a bill. In the center of the office was a large round desk where people were expected to fill out forms. On the desk were little bottles of ink and pens that had to be dipped into the ink in order to fill out the forms.

This was 1995 and even in Russia, it had been at least a couple of decades since such pens had been in use. Because people filling out the forms were unfamiliar with using dipped pens, they weren’t very good at it. As a result, there were ink puddles around each bottle. Every garbage bin was overflowing with ruined forms. People were frustrated and tempers were short.

When it came our turn to be served I asked the clerk why the office did not have ball point pens available since it would solve a lot of problems. He gave the classis bureaucratic answer I’d come to expect in the formerly socialistic society: “Because this is the way we have always done it.”